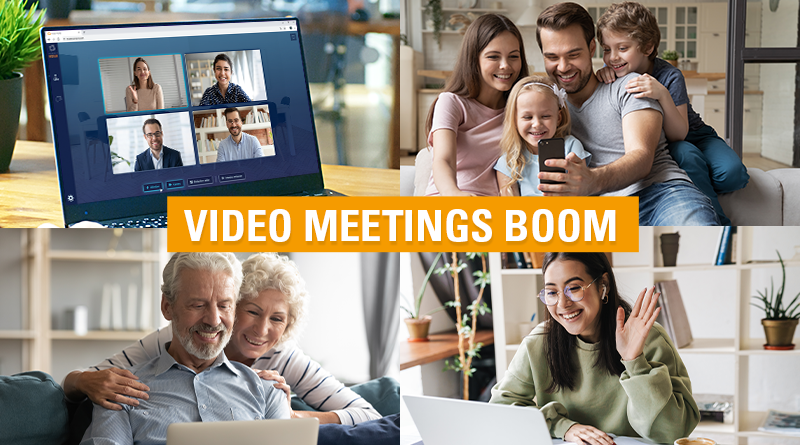 How Corona is driving digitization forward

As in every international crisis, technology is making enormous progress in these times of Corona. What is striking in this crisis is that nobody wants to cut down on social contact. And thanks to video meetings, nobody needs to. The market offers a wide spectrum of products for this purpose, with which people can – whether for business or pleasure – exchange information via video.

The majority of these products have been with us for quite a while – between 10 and 20 years on average. It’s for this very reason that certain questions are now being asked – why are so many of us only now regularly making video calls with family and friends far away? And apparently it took a pandemic to show us that working from home is in fact a feasible option. Thanks to the technology of video conferencing, working life can proceed almost as normal and numerous business transactions can continue to be processed almost as usual, thus ensuring the continuity of operations.

The video call business is booming. From the youth with their Houseparty app to the elderly who never before experienced a video chat but in the meantime are meeting regularly online with their family – suddenly the volume of the online chat community has dramatically increased. According to a recent survey by the German Federal Association Bitkom, 43% of all Internet users are making more video calls: 52% of the 16 to 29-year-olds of those asked have been increasingly using video call services since the start of the contact restrictions. In the 30 to 65-year-old demographic it is somewhat less at 43%, but even 27% of elderly people asked are making increasing use of these services.

Due to the current situation, many people are making video calls for the first time in their lives – as did the English Queen recently at 94 years old. Like millions of other people every day, her call was also on a business matter. And over the last few months, the video call has become so popular around the world that life without such conversations – at least in the business environment – now seems almost impossible.

The retreat into the home workplace has resulted in the demand for multimedia, Internet-based telecommunications solutions reaching a previously unimaginable peak. Authorities, schools and all types of companies are more than satisfied with digital communication and are now gaining experience that is enriching their business life and that they want to take with them into the world “after Corona”. UCC and video conferencing will thus remain, even after Corona disappears. That seems to be the general consensus.

Although many of the established video call providers are still intermittently struggling with inadequate IT security in their services, it will only be a matter of time until they rectify the shortfalls with end-to-end encryption solutions. Many things have been set in motion by Covid-19 that were previously difficult to implement due to a low level of trust – but now trust in UCC tools and the cloud has increased unavoidably.

Due to the growing demand for increasingly powerful and easy to operate video conferencing solutions, some providers have brought forward their product launch, as is the case with the Public Beta version of STARFACE NEON for example, originally planned for early summer 2020. This version of STARFACE NEON will be available free of charge until the fall, and will be continuously developed and automatically updated.

As the “new kid on the block”, STARFACE NEON has appeared on the market at precisely the right time. In addition to all the usual features such as screen sharing, chat and many-to-many conferencing, STARFACE NEON has additional advantages that give the product certain competitive advantages – such as secure TLS encryption for all meetings. Inadequate IT security is thus not an issue. The fact that no software installation is required also makes the tool easier to use and more user-friendly. And STARFACE NEON is operated on German servers – a video service Made in Germany.

The corona crisis has created a framework for a change in the way in which we view communication. And the tools that will enable us to make this change happen are already available.